Some Catastrophic Complications of Circumcision Recorded During 2013

This is what the American Academy of Pediatrics (AAP) says about catastrophic complications from circumcision, on the 2012 Policy Statement on Circumcision and Technical Report on Circumcision:

The majority of severe or even catastrophic
injuries are so infrequent as
to be reported as case reports (and
were therefore excluded from this
literature review). These rare complications
include glans or penile amputation,
198–206 transmission of herpes
simplex after mouth-to-penis contact
by a mohel (Jewish ritual circumcisers)
after circumcision,207–209 methicillinresistant
Staphylococcus aureus infection,
210 urethral cutaneous fistula,211
glans ischemia,212 and death.213

March 8, 2013. Baby bleeds after circumcision, suffers seizures and dies two days later. Hospital and family deny that circumcision was the cause.
http://circumstitionsnews.blogspot.com/2013/03/sacramento-another-circumcision-death.html

March 16, 2013. UNITED STATES: More than $80 million paid out for botched circumcisions since 1985
http://www.arclaw.org/resources/settlements

May 29, 2013. CHICAGO: $1.3 million for botched circumcision, baby had the tip of the glans amputated during his circumcision in 2007
http://www.suntimes.com/news/metro/20417085-418/jury-awards-13m-for-newborns-botched-circumcision-attorneys.html

May 29, 2013. MOROCCO. A 3 year old child had part of the glans amputated during a hospital circumcision. This was reported online by the family, with a text in Arabic and a horrific youtube video (which was later deleted). The mother commented in our blog to let us know that a Canadian urologist had already seen the child and recommended long term follow up in case there was stenosis later, which may suggest that they were either able to re-attach or otherwise close the wound without further complications.
http://circleaks.blogspot.com/2013/05/boy-3-years-old-suffers-partial.html

June 20, 2013. SOUTH AFRICA: R2.2M for botched medical circumcision of a child in 2009. He suffered severe burning, infections and a loss of his normal penile tissue after the procedure.
http://www.iol.co.za/news/crime-courts/r2-2m-for-boy-s-botched-circumcision-1.1534852

Surgery on intersex children could be unconstitutional - after sex reassignment of an intersex boy in State custody in S.C. (castration and amputation of penis)
http://www.splcenter.org/get-informed/news/federal-court-says-sex-assignment-surgery-on-child-could-violate-us-constitution-r

November 28, 2013. A baby died during a medical circumcision in Afghanistan. The parents wanted to avoid the pain of a later circumcision without anesthesia. The anesthesia was improperly applied and the baby died as a consequence. This was only reported on a facebook post which was later deleted by the family. 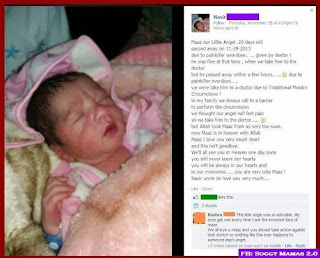 Jewish baby in Pittsburgh has penis cut off during Jewish circumcision. April 2013. Reported December 2013
http://www.dailymail.co.uk/news/article-2530755/Jewish-Rabbi-sued-accidentally-SEVERING-newborn-baby-boys-penis-Bris-Ceremony.html#ixzz2otJjZ9Ht
Posted by Unknown at 7:30 PM